The man looked into the liquid with doubt. What am I even doing here?

Attention fell back to his surroundings. He chuckled silently to himself, I hate this place.

He’d been sitting in the heart of the bar for the better part of two hours. Not considering what day it was, he had just assumed there was a good reason why there was no one else here. So far, he hadn’t heard anything outside of the wobbly ceiling fan circling overhead, the sound of his own voice ordering his single drink, and the bartender’s near silent grunt of acknowledgment.

Today had been an especially bad day. In truth, he liked to come here because he had some vague notion that it was unpopular. He knew there was minimal chance of another soul speaking to him. That’s the last thing he wanted right now. It was a simple solace, to be able to spend this much time uninterrupted. Lucky him. And yet, he still felt out of place, as if he was wasting time better spent elsewhere. That’s usually how these types of things went. He could never escape himself, no matter where he went.

Another half hour passed interminably before he noticed the disturbance.

He felt her eyes on upon him long before he heard her voice. Looks like my luck just ran out.

He looked over. A woman. She was seating herself two stools over. Turning back to his unfinished drink unconsciously, he didn’t respond quite yet. Wow, you’re an asshole.

“So what are you doing here,” she spoke out, clearly to him.

He looked over to her again, and decided to say something.

“Why are you alone?”

He paused. To his surprise, after a few moments, the answer came naturally. It rolled out before he could stop it.

“Just the way it ended up.”

She started to snicker, before turning to order her own drink.

What the hell is she doing?

“So, do you come here often?” he blurted. Once again, the words came unconsciously. It seemed like the right thing to say at this time.

“I do not. In fact, this is my first time coming in here,” she responded immediately. She awaited her drink. He hadn’t caught what she had ordered, too distracted in the chaos of this specific moment.

The silence returned. He decided to speak up once more.

“Yeah, well it’s a dive. Wouldn’t expect to find someone like you in here. I don’t exactly know why I am here.”

“You know…” he trailed off, failing to find anything to add there.

“Do you have a girlfriend?” she said, matter-of-factly. It was barely a question.

“A boyfriend?” she persisted.

“Ah because that explains why you would be here. Guys come to bars to talk to women, generally speaking.”

“Yeah… but not places like this. This is not a place I would go to meet a girl,” he was confused. It must have shown on his face.

She looked him in the eyes. He got uncomfortable and the silent awning of the empty bar pressed in around him. He turned away again, beginning to scratch his beard with vigor.

“Well, why are you here?” he asked her insincerely, accidentally, barely.

Her response was instant. She had been anticipating the return question, “Random occurrence, a spur of the moment decision. Sometimes I feel adventurous and will impulsively drop into places or situations I’ve never been in before. And tonight, I had a feeling about this place. I felt it might catch my fancy.”

“This? This catches your fancy?” he said with rank incredulosity.

He smiled and gazed around the entirety of the bar, for effect. She smiled back.

“Yeah,” she paused. “Yeah it does. I think at some point this is exactly the kind of place we all need to experience.”

He continued to look at her, trying to discern what she meant. Both her words and her presence. It still didn’t make any sense.

“This is definitely a place I think people go out of their way to avoid. No offense,” he said nodding to the barkeep. The man just grimaced back from distance.

“Probably, but maybe that’s the point,” she stopped for a moment, before continuing, “You didn’t answer my earlier question, why are you here?” she asked the question like she knew the answer already. He had a feeling she did. Almost entirely from that intuition, he decided to do something bold. He was going to tell her the truth.

“I am trying to escape,” he said, breaking eye contact with her.

“From all of it. Everything out there.”

“I know what you mean,” she paused, as if in self-reflection, before adding, “And there you go. You just proved my point.”

“That is why this place exists. That is why we all need it, sometimes,” she smiled, crossing her arms before continuing. “It’s a solace.”

He started to smile before stopping himself.

“I see. But not necessarily… I’m not sure it is a place of solace. What about-“

“What about me? What about the bartender? Or anyone else that might wander in? They could just… wreck everything. Right?” She returned, again smiling.

“That isn’t exactly what I was going to say. But yes. If I just wanted solace, a place of peace to gather my thoughts, or,” he stated while lifting his glass, “drown them out… then why wouldn’t I go somewhere in nature, or just stay home, and be left to my own devices?”

“That’s because, I think, you still need to be amongst people. You want to be, even if it isn’t a conscious feeling. The mere chance of interaction, even negative ones, is necessary I think. And besides, the home becomes so familiar to a loner like you, that it can feel like a prison — inhibiting the desired course of “escape” because you can’t escape your own mind there.”

She spoke with resolve.

He took a pull of his drink and squinted in her direction.

“A reasonable assumption. Yes, I have a feeling you-“

“A rather clear deduction, actually,” she interrupted with confidence.

“Not exactly. It just takes one to know one.”

He turned back towards her, a plaintive look on his face. He nodded, conceding the point and wondering further about her. 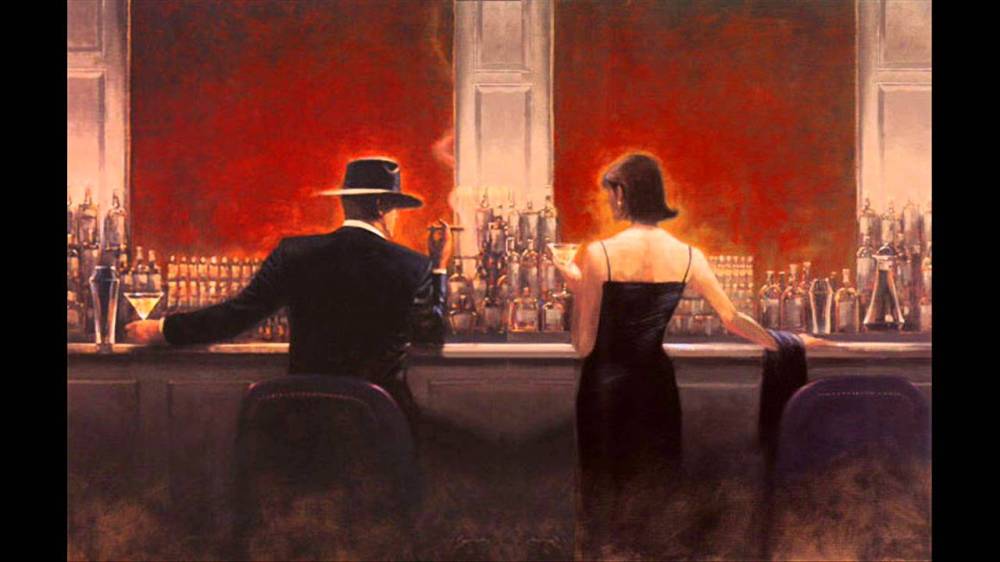